You are here: Home › Blog › Adventures in the Tasmanian Tarkine Wilderness
By Belle on 25 April 2017 in Blog

Sometimes I think that my soul is more wilderness girl rather than the city I was born into. I love going exploring in wilderness areas and it lights up my soul and sets my creative muse afire.

When I first ventured over to Arthur River on the Tasmanian north west coast I had no idea I was embarking on a journey of love. It all felt rather adventurous and off the beaten track but the roads were good and winding through rolling farm fields, through forests and into friendly little towns. 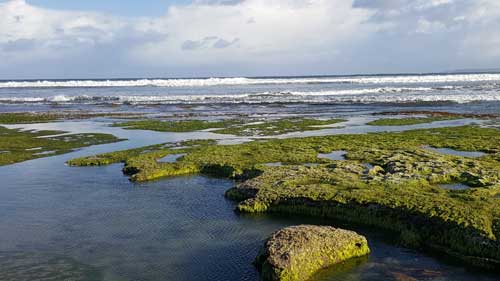 I found that I’d made my way into the Tarkine, an unprotected and magnificent wilderness region about 450,000 hectares with a crashing surf coast backed up with coastal heath plains and mind boggling rain forests.

It all started with my annual visits to the Tasmanian Craft Fair held in the picturesque village of Deloraine in the central north of Tasmania. Every year I added a couple more days to my journey so I could see more of this stunning state. As the fair is in the north I starting exploring the tucked away north west, lured by its reputation of rugged coast lines with its big surf.

I picked out Arthur River as being a coastal village with good accommodation options, a parks and wildlife centre and even a shop. It was only when I was about to head over there that I found out I needed to more of my food shopping in Stanley and Smithton than rely on the tiny local shop, especially for milk. But all good, I found that out in time and I’d already learnt to have multiple meal options packed in my picnic hamper (read, I’d been caught out before with my little adventures and arriving too late to shop).

A Photography and Painting Holiday

Years ago I fell in love with the drive from Devonport to Smithton with the green green fields, vibrant red earth ploughed up for spring planting and the vivid blue skies with puff white clouds. I’ve pulled over many times to take photos and just watch the landscape around me. I realise now I go on photography and painting holidays.

What I didn’t expect was for it to morph into something equally beautiful but infinitely more wild and rugged. Arthur River is on the edge of what’s known as the Tarkine or ta takyana –  the original aboriginal owners of the land. It is a wilderness area that is unprotected with ancient rainforests that are home to magnificent grandmother of the forest trees, 6000 year old stone carvings, countless middens and tool making sites. 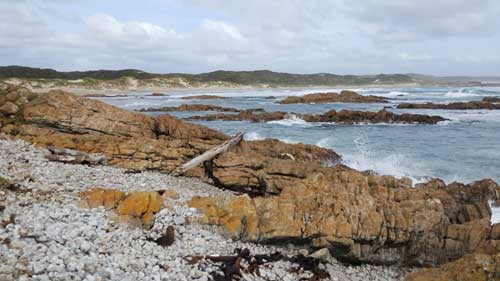 Abundant Wildlife in the Tasmanian Wilderness

The wildlife is abundant and everywhere. I’ve seen white goshawks, loads of echidnas gorging themselves on very irate ants, sea eagles and wedge-tail eagles, spotted quolls and superb blue wrens, seals and sooty and pied oyster catchers, and glimpses of swift parrots (there’s a reason they have earnt their name) and a charming little brown bird take food into her young in a low nest of twigs and leaves.

On my first trip to the Tarkine I stayed on the coast, going on a cruise up the Arthur River being dwarfed by trees reaching into the sky, watching a cheeky seal chase fish up the river, being amazed by a spotted quoll and impressed with the beauty of a couple of sea eagles. I even got to have a drive of the boat which brought out my very serious and responsible nature as I tried not to hit river banks that were metres off to the side but seemed way too close! 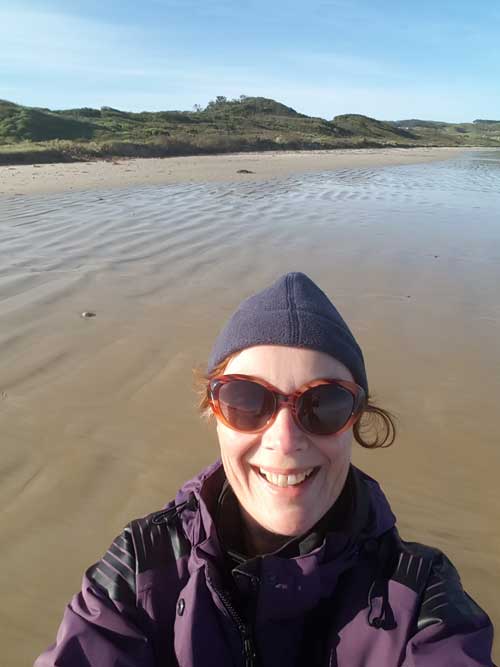 A rare selfie- ever glamorous!

I headed down to Couta Rocks and forged amongst boulders finding smashed shells and the radius bone of a large sea bird – I decided on the spot that it was of course from an albatross! I was introduced to a friendly old sea salt local called Graham who took this Sydney girl on a mad cap beach bug ride down the coast, past Rebecca lagoon and finding bull kelp stems and cutting them into rough hewed balls for me to throw and bounce off rocks. I was like an excited six year old playing on a wild beach with a wild old fisherman. It was close to madness. I loved it. I finished the day off sitting on my balcony watching the Arthur River, a brilliant sunset, eating brie and drinking wine. It was bliss.

The next morning I was planning my next visit. I’ve since been three times and during this time the Tarkine Trails book has been launched. It’s a wonderful book and has lead me on a series of rainforest walks that I wouldn’t have ventured on without it. 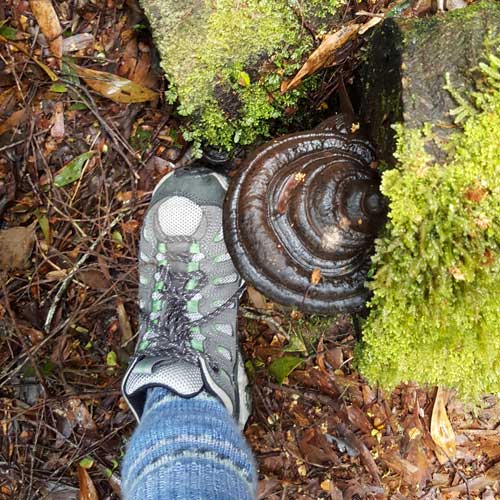 Check out this fungi in the Tarkine rain forest!

I did inadvertently attend the Sydney launch of this book, mainly because when I was invited to an event in Sydney about the Tarkine I instantly said yes, not fully realising what it was all about. I found myself surrounded by people who never really leave the city but who thoroughly support environmental issues. For them visiting the Tarkine was something remote and inaccessible. They were stunned by my explanation that I’d driven there and parked before going on my walk. I was baffled by their confusion.

Going to amazingly beautiful wilderness areas in Tasmania is easy, the Tarkine is accessible. It is just a mind set. 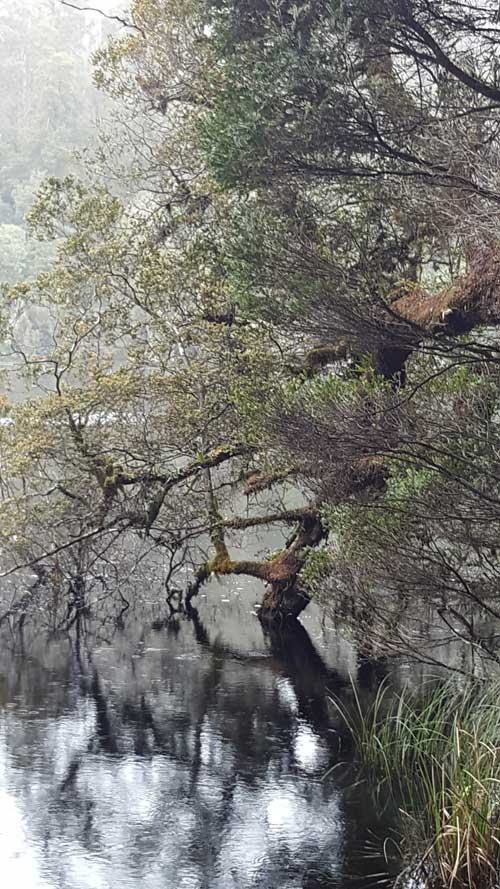 Part of the wonderful delight of the Tarkine is it’s diversity. You can experience as a wild six day hike in remote and rugged forested hills, you can paddle a kayak for an afternoon or a week staying in snug B&B’s or camping out, you can go on 45 minute or four hour rain forest walks and be back at your beach hut for dinner, you can scramble over rocks and walk on bull kelp strewn beaches saying hello to seals – be careful, they do talk back to friendly humans and can likely be heavier than you! At least that’s what I found. You can have all manner of diverse and adventurous experiences of the place.

On my most recent visit I stayed six nights in a beach hut at Marrawah so I could paint and photograph, explore, take my time to just be in a place and fill up my inner creative wells. I didn’t want to leave (it’s a common theme!) but I had to head off to bump into the Tasmanian Craft Fair. Yet again I have more plans to return, to the point that on my way out I stopped at Link Tasmania in Smithton and bought even more maps of the area for future visits. 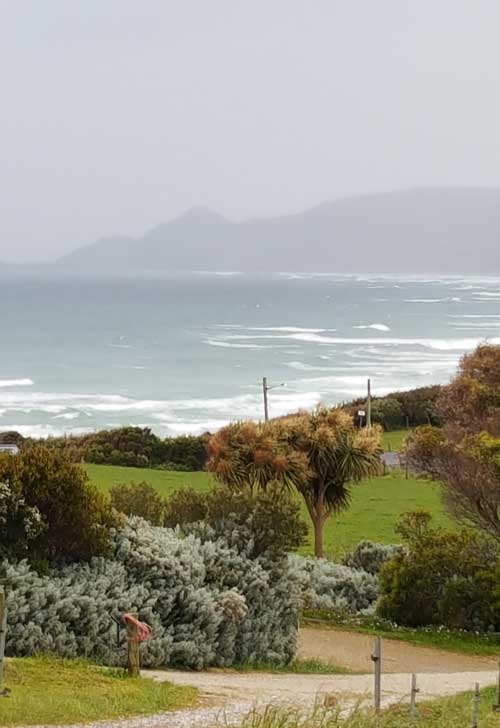 Now my Tarkine photographs are adorning the house and featuring on my wilderness card range while my watercolour paintings fill my first ever painting journal.

The Bob Brown Foundation continues their campaign to have the Tarkine protected, National Park status at the minimum and that would be a great starting point. The Arthur-Pieman Conservation Reserve provides some protection but by nowhere near enough, especially as logging old growth forest and destroying aboriginal sites and artefacts still continues.

For me the Tarkine needs to be protected because it deserves to be saved from bad decisions by corporations and governments, the wildlife and forests, beaches and heath land have the right to continue for thousands of more years. On a practical level there’s money in it for Tasmania and the regions locals from tourism, from green visitors and that’s a key reason Bob Brown and co are inviting us to this stunning region. I discovered it for myself more by adventurous accident before they started their campaign. And while I wouldn’t want to see it get as busy as Cradle Mountain or Freycinet National Park, it will be tourism that saves it from greed.

My love affair with the Tarkine continues, I hope you start yours soon.

Going on adventures is one of the best things I do and I’m already dreaming about my next one.

What adventures have you been on that have inspired your soul?

How I Found Out I Love Being Ambitious, Focused and Determined
My Business Failed, I’m a Failure!