You are here: Home › Blog › Celebrating International Women’s Day
By Belle on 8 March 2016 in Blog

Listening to the radio this morning with the reports about how women continue to be paid substantially less than men across a range of industries (let’s admit it, all industries!) I was disgusted and appalled at stupidity and sexism of it all.  I started thinking of the pay gap I would be facing if I’d stayed in the corporate world and was thankful that I left when I did.

But the reality of it is, I don’t earn as much as an artisan as I would if I’d stayed as an executive. I do fit the worrying statistics of women having far less in their superannuation than men, that rental increases scare me and I know that before long I’ll need to move out of my beloved Sydney because of the rising cost of living, namely rents.

The only way that I am a successful artisan earning her living from what she makes and sells is because women shop with me, they support me with what I do. Yes, I work hard on coming up with original ideas and making my pieces by hand but without the custom of mainly women and some men, who appreciate the handmade, I wouldn’t have the artisan lifestyle I have. 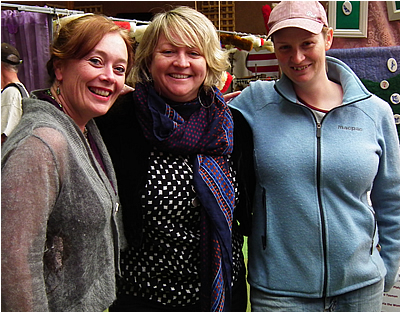 So a BIG LOUD THANK YOU to all her shop and therefore support us artisan women!!!!! Without your backing we would be miserable.

It makes such a difference when you chose how to spend your power and influence. For me at market, obviously the power is in the customer wallet and with her money. By choosing to shop with a market girl you’re choosing to keep the money quickly moving around the local economy – this week my cat’s vet is getting a chunk of my market money, the local fruit and veg shop gets a bite, the electricity company does too and the list goes on. I actively shop with as many small businesses as possible because it matters.

That’s my sphere of influence. The thing is we all have a sphere of influence and we all need to be walking the talk and making a difference with equality in our communities. Whether it’s speaking up about the inequality in your pay compared to the men within your team, choosing to have at least an equal representation of women presenting at a conference and when you see there’s just the token female presenter then calling or emailing the organisers and asking why that’s the case. There really isn’t an authentic excuse for it, if they wanted equal representation they could make it happen – it’s all a choice.

The thing is, we so often don’t take the action about it and we need to. It is where change lives.

When you see a woman being attacked online by small minded and small heart-ed trolls step up and defend her, whack the bastards back and make her feel supported.

When a discussion panel on the radio has more men than women, call or text in and tell them you want women being equally represented.

The more this is done, any of it, the more things will change. The people making the foolish decisions to ignore or under-represent half the population will start to realise what they are doing, because I think most of this is done more from lack of thought than actual sexist intention (well I hope so at least).

We need to celebrate women every day, not just on the 8th March each year. We need to shoot off that email or text message and say we want equality and they need to deliver it. It is as simple as that.

And yes, I am a feminist.