You are here: Home › Blog › How Making a Daily Mark Created My New Range of Jewellery
By Belle on 31 March 2016 in Blog

For years I had a burning desire to paint yet was too scared to give it a go, fearing the unknown. Once I gave myself permission to be crap at it life got a whole lot easier. I bought a box of paints and some brushes for my birthday and sat looking at them for weeks.

Eventually I built up the courage to give it a go. It took the support and encouragement of a Tasmanian artist friend, Mel Hills, for me to find the courage. Mel’s advice was simply to play with the paints.

And she was right.

By playing with the paints I got to get a feel for them, that each paint is different, behaves differently and feels different. The same for my paint brushes, they make different marks, have their own weight and balance in the hand, move across the paper in their own way. It was fascinating.

I bought books to learn how to paint water colours and tried some of the exercises. The best book was the one that Mel made for me. It was a surprise present that arrived in the post and had me instantly in silent tears at the sushi bar when I opened it. The beautiful Japanese waitress came over to see if I was alright and when I showed her the little hand painted book she was nearly in tears.

This wonderful book is one of my most treasured possessions and inspired me to dive into painting with the make a mark a day routine.

When I started thinking about the make a mark a day approach to art I was intrigued and scared by it. So I realised I had to do it. Like all of us my days are rather full and I needed to be able to actually do what I commit myself to. So I decided to give myself a broad scope. Ideally I would want to be able to settle down and paint for at least an hour each day but that wasn’t going to happen. If I had that level of expectation of myself I would fail within the first week and beat myself up. That wouldn’t work.

Instead what mattered was making a mark each day, if that meant basically a scribble in a sketch book at 10pm then that was good enough. If it meant having an hour or two of painting time that was great but I couldn’t pay forward, nor catch up. It was daily activity that mattered. But, if I missed one day in a month or so, then that was forgivable.

And this is exactly what I did.

I kept a sketch book with pencils by the lounge and often my daily mark was made in front of the TV after I’d had enough time to decompress from the day. Some of those marks are dreadful, others were surprisingly fluid and free. One night I was sketching in front of the TV with my great big XL Derwent Graphites and up popped Bunny, based on my beloved soft toy bunny I was given when I was three years old. It felt like saying hello to an old friend. 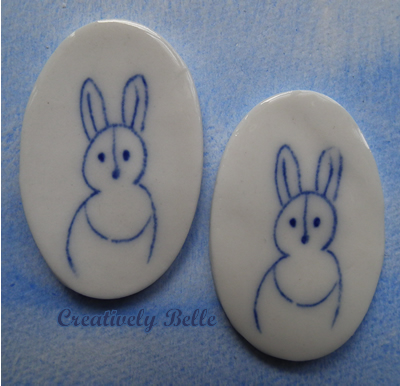 Even happier, in a pair!

One day when playing with the paints Lord Tasman arrived, the handsome fella he is. I instantly fell in love. I still think he is one of the most gorgeous wombats a girl is ever going to meet.

I painted hundreds of birds, trying to capture that sense of soaring over the ocean that so enthralled me when I was watching them from the sea cliffs in Tasmania.

The kangaroos took the longest amount of time. I painted so many variations of these girls, trying to get that look of wonder and wariness that they had when they are figuring you out. 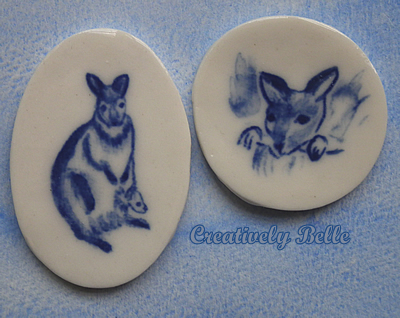 Just checking you out!

Della the Platypus was surprisingly easy to paint. Figuring out how I wanted to represent her took more time, playing with the design and how she would fit within the porcelain itself was tricky.

Some days I made just one or two sketches. Other days I painted over 20 characters. I went through one of those big pads of 200 watercolour sheets and half filled two sketch books all in three months.

Next month – tomorrow – I’m starting my second three month make a mark a day experience. As part of it I’ve booked in for my first water colour painting class, it’s an eight week course at a local gallery. I’m very excited about it. Imagine, three hours of painting at a time! And having face to face guidance.

I’m feeling really curious about what might come from this make a mark a day season this year. How will it effect my range? What sort of skills will I develop? Who will emerge and say HELLO! this time? Oh, I just want to jump in! Maybe I’ll start a day early…..

Tips for Starting Your Own Make a Mark a Day Project

Learning About Loving Authencity
Getting Your Ducks in a Row